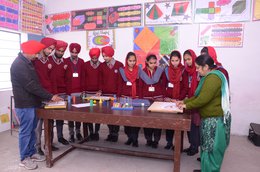 Previous Next
Baba Gobind and Brig. Bal Senior Secondary Public School is affilated to Punjab School Education Board and the instiution offers education in both English and Punjabi medium.

At present. we offer education in English as well as Punjabi Medium. The curriculum is as follows:

The objective of the test and the examination is not merely to record the pupil's achievements but also to assess and identify the student's academic strengths and weaknesses. The results disclosed by these tests should be used by the teacher to adapt more closely to the individual needs and capabilities of the student and whereever necessary, to organise special instructions in areas where their individual weaknesses have been identified.

A student may not be allowed to sit in the annual examination if he/she has not put in a minimum of 75% of the total attendance of the academic session, including attendance in previous school if the student has been admitted on transfer. The Principal is authorised to condone shortage in attendance upto 15% in special circumstances meriting this concession e.g. illness etc., i.e. permit a student with 60% attendance to take the annual examination.

The results of the annual examination declared by the Principal in the first week of April.

The final assessment of a student at the end of the academic year shall be based on his total achievements.